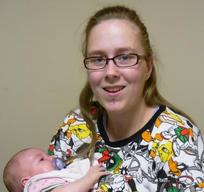 “I started smoking when I was 18. I’d smoked for five years, but when I found out I was pregnant with my third daughter, Alexia, I knew I would have to stop smoking for good. I’d tried to quit before throughout my other pregnancies, but as I didn’t have any support, I ended up starting again.

Being pregnant became my motivation to stop smoking.

“I gradually cut down my cigarettes, then a few weeks later I just quit. I’d had enough. But I knew I would need more support as I was experiencing a lot of stress and didn’t want to start smoking again like before, so I got in touch with the stop smoking service.

“A few days after I quit was the hardest. I didn’t realise that you have to change your routine to change your habit – I was doing everything the same and there were just gaps when I would usually be having a cigarette and I didn’t know what to do with myself. The stop smoking service told me to change my routine and it really worked.

“Before, on a morning, I would get up and see to my daughters – Lydia and Sophia – then have a cigarette. Changing my routine made it a lot easier – I started to swap around the things I would do for my girls on a morning so that it would pass the time after when I’d usually have a cigarette. Keeping busy with my daughters meant I didn’t even realise I’d missed my usual morning smoke.

“The stop smoking service offered me nicotine replacement therapy to help with cravings, but I found that it wasn’t for me, so I dealt with my cravings by playing with my kids! I’d play games with them and go out to places with them and it took my mind off wanting to smoke. I used to spend over £80 on cigarettes a week, but now I have quit I can use the money to spend on my kids.

“One of the best things about quitting smoking is that when I breastfeed Alexia, the smoke isn’t on my breath. Smoking also reduces your milk supply when you are breastfeeding so I know I am doing the best for her now. She is doing really well which makes me want to never go back to smoking. I don’t like it when someone has been smoking and wants to hold Alexia – I am really protective of her health.

My advice to someone wanting to quit smoking is to make sure you have the support there first.

“When I tried to quit for the first time I found it hard as I didn’t have anyone around me for support – but this time I had the stop smoking service there with me.

“I feel positive about not smoking – I eat more than I used to, I have more energy and I feel healthier. I walk through town and I don’t want to smoke, I like the fresh air. Instead of thinking “I need a cig”, I look at my daughters and they keep me going. I’m doing it for my girls.”